Finland, Lapland and the origin of The Santa Claus

Possibly more than once you have heard of Lapland, a lost place in northern Finland, in which the original residence of Santa Claus is said to be located, is this true? Well, that’s right, specifically in the city of Rovaniemi, the capital of Lapland.

In addition to the midnight sun, the Northern Lights and the natural wonders offered by the Arctic Circle, Rovaniemi has become very popular for its close relationship with Santa Claus, in fact, this is one of its main focuses of tourism today, where you can live the entire Christmas experience at any time of the year and visit first-hand the town of Santa Claus, their reinnes, elves and all their magic. 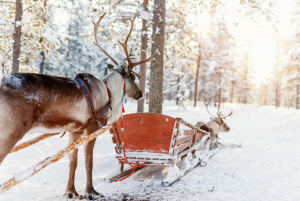 Historically Rovaniemi would not be the hometown of Santa Claus, but he would be originally from Korvatunturi, a mountain that lies between the border of Finland with Russia, in the region of Lapland. Despite knowing the name of the place, it is not possible to specify the exact location, since it is said that only some privileged people enjoy this information. But why then does Rovaniemi boast of being the hometown of our Christmas character? Well, it was not until 2010, that this privilege was granted to the Lapland capital, and that Korvatunturi turned out to be a location of difficult access, only designed for the most adventurous.

Although we start from the most popular and well-known origin is the region of Lapland, there have been many who have tried to appropriate these rights and have affirmed that Santa Claus resided in points of their respective countries. Norway, for example, has more than once reiterated that Santa Claus was originally from the city of Droeback, about 50 kilometers from Oslo. The Swedes did the same with the city of Gesunde, northwest of Stockholm. The Danes claimed that he lived in Greenland and the Americans are clear that his residence is in Alaska.

An iconic character like Santa Claus can have many residences, since his mission is to travel the world distributing happiness to the little ones. What we have clear is that Lapland seems to be its most popular residence and the one you can visit at any time of the year. A place that undoubtedly houses the magic of Christmas.

If you want to know more about Santa Claus visit our blog, in which we tell you curiosities about the origin of this historic character, Christmas events, activities and everything you need to know about to live the Christmas experience to the fullest. You can also consult our letters so that this year your child receives the answer from Santa Claus himself. Do not hesitate and ask for your letter now!